Back to the Classics 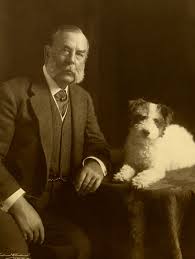 It’s easy to walk on by the (seemingly) modest house at 67 East 93rd street but once inside, it’s sheer wow. I went to the George F. Baker House courtesy of an art group from one of the “seven sister” colleges (talk about quaintly archaic locutions!) where we were treated to a tour given by the Classical American Homes Preservation Trust. This house and its neighbor belong to Richard Jenrette of Donaldson, Lufkin & Jenrette who lives there when he’s in New York.( Dick, as many people in the group referred to him, owns several other houses, many open to the public. Check out www.classicalamericanhomes.org for details.)

This house was built, complete with elevator, for George Baker, considered by many to be the founder of Citibank.  It’s only one room wide with mostly twelve foot ceilings and connected to number 69 next door that serves as HQ for the trust.  (The property closer to Park Avenue was sold for $1 by Mrs. Baker to the Russian Orthodox Church.)

The dining room is a perfect oval including the concave doors. The entire second floor, originally built for servants, is now a library filled with books by New York authors or about NYC. It also houses a walk-in safe. The downstairs entry has wall paper panels depicting the “summer ” Olympics as envisioned during the Classical Greek era.

To stick with the classic elements, this recipe, from Saveur, is a classic tomato sauce from a child of renowned cook Marcella Hazan. The author says it takes zip to prepare;  keeps brilliantly in the freezer and can be defrosted in the time it takes to boil some pasta. 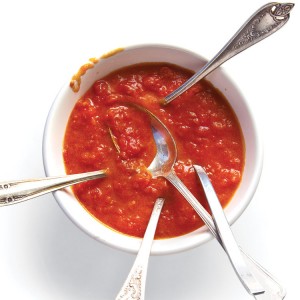 Bring butter, sugar, tomatoes, and onion, to a boil in a 4-qt. saucepan over medium-high heat; reduce heat to medium-low, and cook, stirring occasionally, until flavors meld and sauce is slightly reduced, about 45 minutes. Discard onion, and season sauce with salt and pepper before serving.

This entry was posted in Uncategorized and tagged classic, New York, tomato. Bookmark the permalink.

One Response to Back to the Classics