These Boots Aren’t Made for Walkin’

To wind up 2022, a friend and I went to Shoes: Anatomy, Identity, Magic at the Museum at FIT (Fashion Institute of Technology) (it closed December 31.)  Contrary to how many women feel, I hate shoes as most are supremely uncomfortable. I’d rather shop for bathing suits than shoes. But, I’m digressing…

The exhibit featured over 300 pairs of shoes, boots, sandals, and sneakers, many pretty terrific if you look at shoes as objects of style rather than comfort or utility. Take this delightful pair: no need for open carry, just strut. 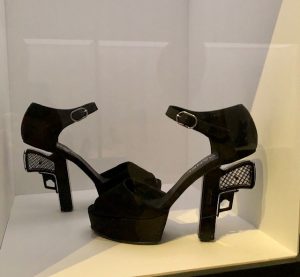 Or these by Tod Oldham which aren’t quite as painful as they look as the ‘barbed wire’ running up the leg is made of leather, not metal 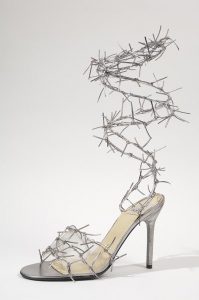 Several pairs of black high boots were described as ‘dominatrix’—a great cross-marketing opportunity with masks, corsets, whips and chains. Shoes for little feet, (as in kids and from earlier eras when feet trended small), are included as well as footwear for men. 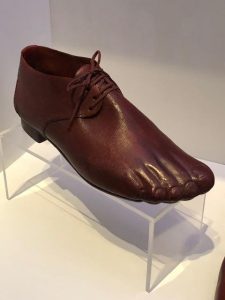 In the 1940s, shoe stores routinely fluoroscope kids’ feet exposing them to radiation, a health hazard not only for the X-rayed children but even more so for the salespeople who used the machines. The process began to be banned in the 50s.

High heels were first worn by Persian men in the 10th century as a way for calvary riders keep their shoes in their stirrups.  Today many women happily risk chronic knee and back pain, hip problems and hammertoes to wear stilettos as—per various studies– it makes them feel sexier and empowered. (Or wear armor/ carry a blowtorch.)

The show had plenty of platform shoes as well as sneakers such as Nike ‘Air Jordans’ from 1985. As Cinderella is supposed to have said, “One pair of shoes can change your life.”

And now we have: Shoestring Potatoes (recipe courtesy of Ina Garten)

Slice potatoes into thin matchsticks with a vegetable slicer or mandoline, (be careful to not cut yourself). Drop potatoes into a bowl of cold water as you cut. Drain potatoes and dry thoroughly with paper towels. Drop potatoes in batches into the hot oil and cook for 3 to 5 minutes, until golden brown. Remove from the pot with a wire basket skimmer or slotted spoon and drain on paper towels. Place on a baking sheet, sprinkle with salt, and keep warm in the oven while you cook the rest of the potatoes. 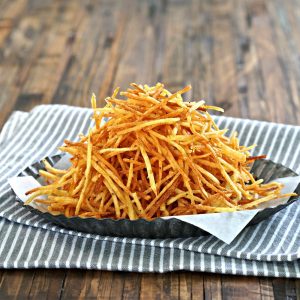 Need something to drink with your potatoes? Pour your beverage (ideally champagne) into a shoe. Besides being the essence of a silly romantic gesture, over the years this has been done as a hazing punishment or to bring good luck.

Drinking from a shoe is popular in Australia where it’s called doing a shoey.  Ah, those madcap Aussies!

This entry was posted in Uncategorized and tagged Australia, potatoes, salt, shoes. Bookmark the permalink.

One Response to These Boots Aren’t Made for Walkin’