Art in the ‘Hood 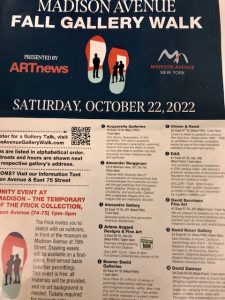 Saturday, October 22nd, was one of those days of perfect New York fall weather—sunny and warm but not hot.  Gorgeous weather was good for the Madison Avenue Fall Gallery Walk, an event in which many art galleries, (typically open on Saturdays anyway), go the extra mile offering talks and sometimes light refreshment a la cookies or other small treats. Outside the participating galleries were displays of dark pink and blue balloons.

Participating galleries were between 57th and 83rd streets, mostly not on Madison Avenue but on the side streets. I went to several close to home starting with Les Enluminures, 23 East 7 3rd Street, a gallery that began in Paris and has branches in NYC and Chicago. This gallery specializes in medieval manuscripts and jewelry with a case of rings from the first through the twentieth century. If you have a lot of spare change you might like this ring with a rare ‘black’ diamond. Lois Wagner Fine Arts, 15 East 71st , showed work of Timothy J. Clark whose paintings I had recently seen at The Hispanic Society (along with Mr. Clark in person who was giving a tour there.) Clark paints in watercolor which interests me as I dabble in the same medium (and there the resemblance ends.) He paints interiors, urban landscapes and portraits; I especially like his bicycles. 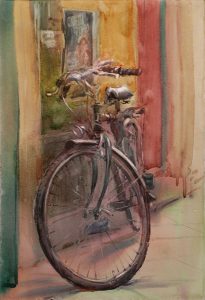 Next onto Hauser & Wirth at 32 East 69th Street to see paintings by Lorna Simpson, known for making large works that blend photographs and text. In addition to photography, Simpson makes sculpture, drawings, collage, felt and films. Born in Brooklyn and famous since the 1980s, “Simpson uses the figure to examine the ways in which gender and culture shape the interactions, relationships and experiences of our lives in contemporary America. “ (Note: not my language—it’s art-speak from her website: https://lsimpsonstudio.com)

I dashed into the Craig F. Starr Gallery, 5 East 73rd Street, which wasn’t an official part of the Gallery Walk as they were busy  hanging an upcoming show, mostly because I had briefly met Craig Starr through a friend’s introduction. This gallery shows work by a host of luminaries including Richard Sera, Robert Rauschenberg, Barnett Newman, Myron Stout, Jasper Johns and others. The new show here  opens early November. 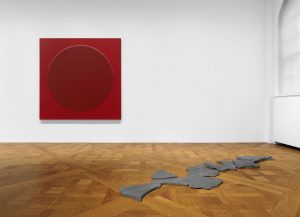 My final stop was to see works by Merrill Wagner at David Zwimer, 34 East 69th Street. Wagner works with “a variety of conventional and unconventional supports—ranging from canvas and paper to slate, stone, steel, and Plexiglas” with many examples on view. Her work is incredibly varied, colorful and often fun.

Needing a little sustenance I went home for lunch.

From art to artichoke (one of my favorite foods but not part of my meal). This is an easy thing to serve with drinks: 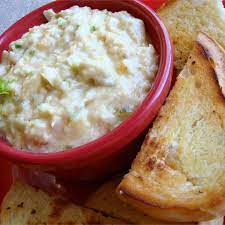 Preheat oven to 375 degrees.  Mix artichoke hearts, mayonnaise, and Parmesan cheese in a bowl until well combined. Spread mixture in a 9×13-inch baking dish. Bake in the preheated oven until bubbly and golden brown, about 15 to 20 minutes.  Serve with crackers, pita chips or what you will.

If you know it, sing Never, Never Be an Artist from the musical Can-Can by Cole Porter (another fave.) If you never heard of the song, try this:

One Response to Art in the ‘Hood