The Heather on the Hill 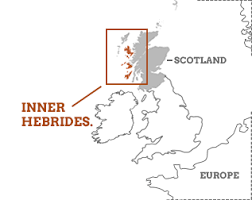 The middle week of my Scottish caper was spent in the Inner Hebrides, the area where a great deal of Scottish Gaelic literature and music began. At each of our four stops my travel companion and I usually had at least a two-night stay with ample time to explore. The Inner Hebrides is a lovely area in many ways and probably truly terrific for campers, hikers, bird watchers and other nature buffs.

Once off the Jacobite Steam Train from Glasgow, we were driven to Spean Bridge to our guest house, Old Pines, where we had an excellent multi-course dinner. The house was very comfortable with books to browse, good beds and a terrific view of Ben Nevis, Scotland’s highest mountain

Ben Nevis (which I did not climb)

The next day we went to Portree, capital of Skye, for a full day tour with Donald,  a guide with a heavy—to me, almost unintelligible– brogue. That day was one of few when it rained almost the entire time. Donald drove us and four others to various landmarks including the large rock formations known as the Old Man of Storr, (which supposedly looks like a giant lying down), and the Stallion’s Head. Both reminded me of when I cruised China’s Yangtze River with guides pointing out “sights” on the cliffs alongside the boat that they described as “Lions’ Mane” or “Three Galloping Horses.” Both Chinese and Scottish sights require a fair amount of imagination. Later we clambered around the Fairy Pools and Fairy Glen—more rocks some with cliffs—and saw Loch Dunvegan and Dunvegan Castle.

After that came Inverness where the server at a lovely restaurant told us they “only serve lamb in the winter months.” Peculiar, we thought as Scotland is sheep city. Later we heard that many eating places throughout the area serve lamb year ‘round. Inverness is home to Leaky’s, a wonderful second-hand bookshop with a trecherous flight of circular stairs 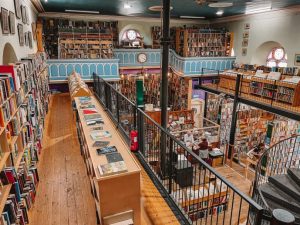 worth climbing to see the stained glass windows up top. At a dinner here I encountered samphire, aka sea beans, which are a pretty, greenish vegetable with very little taste.

At Pitlochry, a cute albeit somewhat touristy town, we stayed at a particularly terrific guest house run by a very welcoming couple.  Going to dinner that night we walked in pouring rain, (again a rarity as most of our trip was in warm, sunny weather, unusual in Scotland), past the famed salmon ladder to a restaurant in a stone building dating from 1650. The building is wonderful; the dining badly hampered by a lack of staff as Scotland has been hit by the same labor shortage as every other place.

The following day we visited Blair Atholl Castle where anything that could be made of deer antlers, i.e., a chair, light fixture, wall décor —is. 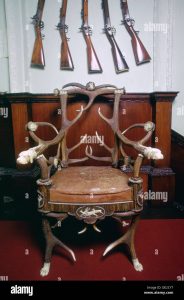 Victoria and Prince Albert once stayed here for several weeks and afterwards allowed the then-current Lord to form a personal army.

After touring the castle we explored the fabulous gardens, one with gigantic fir trees almost as massive as California redwoods. In one of the castle’s huge fields we counted hundreds of Boy and Girl Scout tents housing kids on a weekend bivouac.  I did not envy them or their leaders. We hit a warm spell; typically, these Scouts would be thigh-deep in mud. 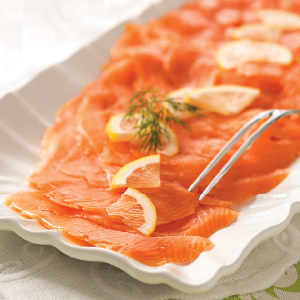 OK folks: a recipe anyone can pull off.  Buy some good smoked salmon which should be cut thin. Invest in good dark bread and a lemon. Oh, and some capers if you like them. Chopped onion if that’s your thing. Lay salmon, bread, lemon wedges, capers and onion if using on a big plate, hand around napkins and watch your treat be lapped up.

I serve this with drinks of any kind- ginger beer to Prosecco, as it’s a never fail. If you know Speed Bonnie Boat sing it. If not, here’s the link. In Scotland Bonnie Prince Charlie is referenced repeatedly.

This entry was posted in Uncategorized and tagged lemon rain, salmon, Scotland. Bookmark the permalink.

One Response to The Heather on the Hill