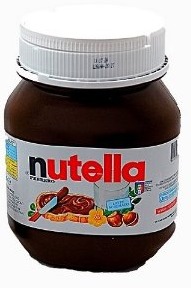 Somehow, February 5, National Nutella Day, slipped past my radar.  Nutella, for those who have avoided it either unknowingly or deliberately, is the chocolate/hazelnut spread  created by Pietro Ferrero in the early 1940s when there was very little chocolate available because  0f WWII rationing.

In its earliest form, Nutella was known as pasta gianduja, from Gianduja, a marionette character from the Italian area of Piedmont where sweets made from hazelnuts were, and probably still are, popular. Pasta gianduja was originally formed into loaves that could be sliced as a sandwich ingredient for kids. (As a child, once in a while I was given buttered bread with a hunk of chocolate as a snack. What did you get?)

Last February,  a colleague stopped at my office door holding a tin. “Have a brownie,” she said. I demurred. She insisted, explaining that this was a brownie unlike others. Finally I gave in. One bite and I saw the light. That’s when she clued me into World Nutella Day, a cheerier  occasion than say, National Tsunami Awareness Week, celebrated from March 27-April 2 — apologies to anyone with in any way involved with tsunamis. My colleague then  shared her recipe. Give Nutella brownies a shot and watch them disappear.

adapted from Ricardo Magazine, Winter 2008 ( with thanks to Lyn Osborne)

Preheat oven to 325F. Line the bottom of an 8 inch square pan with parchment paper, letting the paper extend over the two sides.  Butter the other two sides. In a bowl, combine  flour and salt. Set aside. In another bowl, beat the eggs, Nutella, brown sugar and vanilla extract with a mixer until smooth. With the mixer on low speed, add the flour mixture and melted butter, alternating between the two. Scrape the batter into the cake pan. Bake until a toothpick inserted into the center comes out clean with at most a few crumbs attached. about 35-40 minutes. Cool in the pan for about 2 hours, unmould and cut into squares. Makes about 16 brownies.

If you want a more pronounced hazelnut taste, chop some hazelnuts and sprinkle over the top. With or without, you won’t have brownies left for long.

This entry was posted in Uncategorized and tagged brownies, chocolate, hazelnut, Italy. Bookmark the permalink.

4 Responses to Let’s Hear It for World Nutella Day