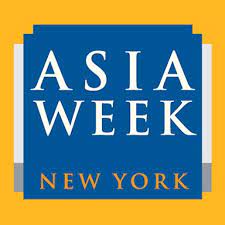 Asia Week New York, self-described as a “nine day extravaganza of exhibitions, auctions and museum shows,” takes place towards the end of March and has done so since 2009 barring when the city –and the world –has been in shutdown mode.  I learned a little about Asian art from my late husband who owned Art Asia, a gallery-cum-retail biz on Madison Avenue, so the week is always of interest.

In this Year of the Tiger there were opportunities to view Asian porcelain, jewelry, textiles, paintings, ceramics, sculpture, bronzes, prints, photographs, and jades sourced from different Asian countries and dating from 2000 BC to the present.

I went to three exhibits, all worthwhile,  all very different as are the three galleries.

Da Ichi Arts, 18 East 64th Street, tucks a lot into a small brownstone space.  The gallery’s Asia show was Future Forms: Avant-Garde Sculpture in Modern Japanese Ceramic. Kato Momi made this beautiful ceramic piece of stoneware that is a very light pale green. Happily, it sold. Shingu Sakaya’s Erosion reminded me of a sea anemone which the gallery assistant agreed was apt as she explained the complicated method by which the inner “tendrils” are rolled and hand-cut. Work by Jonathan Yukio Clark was at Miyako Yoshinaga, 24 East 64th Street, as was Jonathan himself. Japanese-American, raised in Hawaii, Jonathan showed me the stones he cast for this work which are based on actual stones in a wall built in Japan by his grandfather. The piece has a little sliding panel and incorporates a monotype (look it up; too complex to explain here) and several kinds of exotic wood At Colnaghi, 38 East 70th Street, work from TAI Modern, a gallery in Sante Fe, focused on bamboo. Though all of it was worth seeing, the highlight were pieces by Yufu Shohaki, an 80-year-old artist known for his rough-plaited baskets that incorporate bamboo branches and roots, half-split chunks of bamboo, and bamboo ropes meaning he twists long pieces of bamboo into ropes and then makes shapes of them. 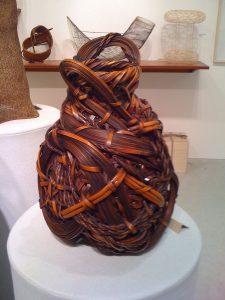 Asia Week is an exceedingly special time with lots of great work that isn’t ordinarily featured. Would that my bank account would permit owning one or two!

This recipe for Asian slaw is easy—don’t get fazed by the ingredients. If you can chop a carrot—or buy one already chopped– you’ve got it. Asian Slaw from Once Upon a Chef by Jenn Segal

2 cups prepared shredded carrots (can be bought ready to go)

½ cup chopped salted peanuts (or you can leave them whole)

Whisk together all of the ingredients for the dressing in a bowl –be sure the peanut butter is dissolved. Set aside.

Combine all of the slaw ingredients in a large mixing bowl. Add the dressing and toss well. Let the slaw sit for at least ten minutes so the vegetables have a chance to soak up the dressing. Taste and adjust seasoning if necessary (maybe needs more salt?)

Note: Leftovers will keep in the fridge. Dressing can be made and stored several days ahead. This will pair well with almost any main course.

If you know or wish to look up a toast in Japanese, Korean, Chinese or another Asian language, do so.  Won’t matter if you raise a glass of water, beer or something more exotic.

This entry was posted in Uncategorized and tagged carrots, ceramic, Japanese, slaw. Bookmark the permalink.

One Response to My Asia Week (redux)