Listening from Head to Foot 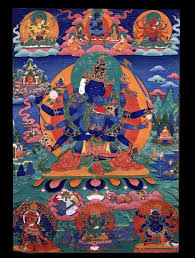 Currently I don’t practice yoga but regardless, I’m a fan of things Om-related.  The whole Tibetan/mystical/artistic and, for some, spiritual gamut is brilliantly presented at the new Rubin Museum exhibition, The World of Sound.  (The Rubin itself is often overlooked among NYC museums as it’s on West 17th Street in the space that once was Barney’s, neither part of the uptown Museum Mile grouping nor downtown like the Whitney).

The show is a stunner—elegant and absorbing for eyes, ears and total body (sounds like one of those immersion tanks but trust me, it’s not.) Works of art from the Rubin’s permanent collection are displayed like the small, gold Milarepa, a statue of someone 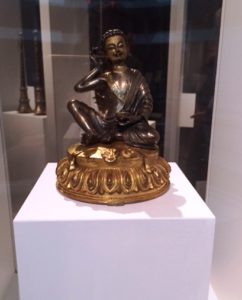 listening to himself while singing, from 15th-16th century Tibet as well as painted mandalas and the sound of OM made visible. Everywhere you turn is sound; walking up or down the spiral staircase where “drone” (not the aircraft) sounds wax and wane; inside smaller spaces and even in the restrooms.  The experience is soothing and pleasant, a sort of inside- your- head white noise. Quoting Risha Lee, the exhibition curator, “sound is not limited to what we hear with our ears. It is composed of vibrations that resonate in our body…” Yes indeed, Risha. 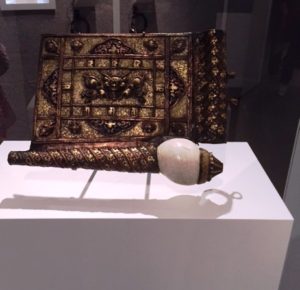 The leg bone trumpet is pretty cool as are the sounds it makes which are heard via headphones. Next to it are other kinds of trumpets with their own headphones and their own, distinctive sounds. There is a space devoted to “Deep Listening” and an area where visitors can lie on a leather sofa and take in sounds.  I wish the entire experience could be transported to my living room or, better yet, to a bubble I could carry around as I walk through noisy New York.

The only food with sound that came immediately to mind is Snap—Crackle—Pop and somehow Rice Crispies are too banal to go with such a beautiful exhibit.  Instead, here is a recipe for Curried Potato Salad said to be positively Himalayan.  Stay tuned because I’m going that way in very late autumn. 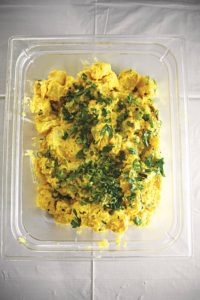 Zest and juice of 1 lemon

Boil the potatoes in a 6-qt. saucepan of salted water until tender, about 45 minutes; drain and chill. Peel and roughly chop the potatoes; place in a large bowl and set aside.

Heat oil in a 10″ skillet over medium-high heat. Add chiles and cook until golden, about 1 minute; let cool. Transfer oil and chiles to a blender with the yogurt, tahini, curry powder, zest, juice, salt, and pepper; purée until smooth. Pour dressing over potatoes and stir in half each of the cilantro and scallions. Garnish with remaining cilantro and scallions.

I’m betting beer is a good drink with this and more appealing than  that Himalayan fave, yak butter tea.

This entry was posted in Uncategorized and tagged Himalaya curry, museum, OM. Bookmark the permalink.