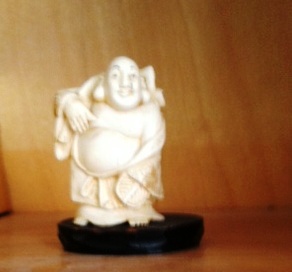 When I first married, friends of my parents gave us an ivory netsuke (‘net-ski’) of a pot-bellied man with a pack on his back. We thought it delightful but didn’t have a clue as to what it was.  Fast forward to my marriage to Joel, then an Asian art dealer, who taught me about netsuke and a great deal else.

Invented in 17th century Japan,  netsuke are part the system that enabled men, whose clothing lacked pockets, to store items like tobacco, money, medicines or other small items. Typically, men placed their belongings in a small stack of highly decorated boxes called inro, held together by a cord and secured by a netsuke that served as a sort of toggle. A bead, known as an ojime, went on the cord between the netsuke and the inro and slid up and down, both to keep the stash together and get at something in one of the boxes.  (Women had to carry small items in their kimono sleeves which must have meant much more organizing—no surprise there.) 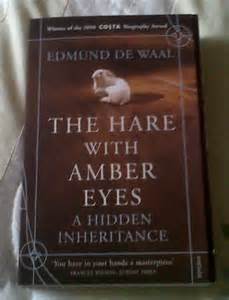 The book, The Hare with Amber Eyes, recounts the history of 264 netsuke that celebrated potter, Edmund de Waal, inherited from his uncle who lived in Japan. These tiny figures traveled over a fair share of Europe, were probably confiscated by the Nazis and finally resurfaced in London. If you have somehow avoided reading the book, do yourself a favor and get a copy.

Hundreds of pieces of De Waal’s pottery were on view about six weeks ago at a New York gallery, each piece painstakingly arranged by De Waal off-site and then tweaked at the gallery by the artist with a team of associates. De Wall’s work is minimalist to an extreme; most pieces are small and rendered in neutral whites, grays and black, some with a touch of gilt. 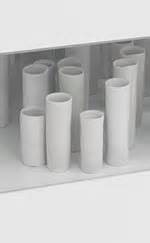 I found the overall effect soothing when I badly needed a little calm and deliberately avoided thinking how easily the fragile masterpieces could be reduced to shards. My hands, and those of other gallery-goers, were by our sides or in our pockets to ward off any potential bulls encountering china.

An (easy) Japanese recipe seems appropriate here. For a cultural mix and a nice twist, these beans would make a great Thanksgiving vegetable. 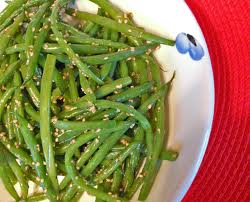 (serves 2- 3 but easily multiplied for more)

4 cloves garlic, minced (or less for the garlic-averse like me)

1 Tbls sesame seeds, toasted just long enough to make them give off a scent

Steam beans (or nuke them—be sure they end up crisp/tender.)  Drain well and move beans to  a serving bowl.

Enjoy Thanksgiving, Hannukah or whatever comes your way. I will be toasting Joel, turkey-meister extraordinaire.

This entry was posted in Uncategorized and tagged beans, ivory, Japanese, women. Bookmark the permalink.