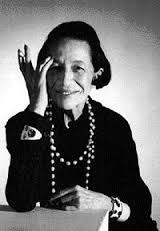 A flamboyant, ugly duckling who managed to steal the thunder from many a swan and is credited with inventing the profession of fashion, Dianna Vreeland was entirely her own creation.  She began her career as a columnist for Harper’s Bazaar where her ‘Why Don’t You’ column was much talked about (largely  because it outrageous, i.e., suggesting women wash their hair in dead Champagne or dress their children like Marie Antoinette.) Later, she joined Vogue. Vreeland’s final career move was transforming the Metropolitan Museum’s Costume Institute from stodgy into fabulous, organizing blockbuster shows including tributes to Balenciaga and Yves St. Laurent.

Diana Vreeland: The Eye Has to Travel, is a fascinating documentary that opens in her famously very red New York apartment. 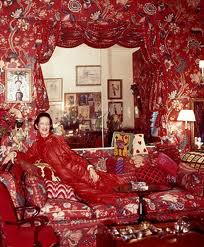 If you use Netflix or can get it from your library, give it a shot.

Elaine Stritch, the celebrated entertainer noted for her gravelly voice, voluminous white shirts and  great legs,  recently decamped from her apartment in New York’s Carlyle Hotel to return home to Bloomfield, MI. (Bets are being taken as to whether or not she’ll return to the Big Apple.) 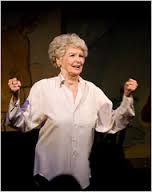 I saw Elaine Stritch: Shoot Me, at the Tribeca Film Festival and have seen the genuine article on stage several times. Another real original, she’s now eighty-seven and still a force. This film is especially moving as Stritch permitted, (according to the director, encouraged), filming in highly vulnerable situations including several hospitalizations for diabetes.  Hats off, ladies.

For an original recipe, here is something my mother sometimes whipped up to serve with drinks. (Remember, this was a woman who almost never entered a kitchen but managed to orchestrate terrific food.)

Equal parts smooth peanut butter and catsup (Yes, it sounds revolting but where is your sense of adventure?)

Crackers—your choice although my mother served it on original Ritz. (Don’t select a cracker with an assertive taste.)

How to: In a small bowl, mix peanut butter and catsup together. Mound a generous dollop attractively on each cracker. If you like, top with the bacon.  Honestly, it’s delicious and the perfect complement to your cocktail. 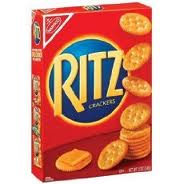 This entry was posted in Uncategorized and tagged bacon, catsup, cracker, Tribeca. Bookmark the permalink.