Have you re-watched all three Godfather movies recently? If not, give them a shot.  The films are terrific, especially parts I and II– part III feels as though Coppola ran out of steam and stretched to tie it all up for a grand finale. The very end includes bits of the opera Cavalleria Rusticana without Pagliaccii— so often played together the opera world refers to them as as “Cav and Pag.”

The films were also a terrific way to revisit Sicily, a fascinating trip from some years ago. Coppola wasn’t on hand to film our climb up Mt. Aetna

Mt. Aetna on a nice day

that began with a bus trip from Taormina (clad in tee shirts and shorts); a ride up the mountain in a gondola ski lift, (now wearing sweaters and windbreakers we had brought as well as heavy parkas provided along with our lift tickets); a Jeep that shuttled us over a lava field and finally, a half-mile trek in ankle- deep snow.  What a hoot to gambol at the summit amid vents releasing steam from Aetna!

Coppola was also not there to witness our arrival via rented car in Palermo. Anyone who has been to Europe knows that in many cities street names are written in charming, highly illegible blue script on ceramic plaques placed high up on building walls.  Reading them in ordinary circumstances is a challenge—in a drenching rain and high wind it was close to impossible. A few expletives were exchanged before we found our hotel.

The food in Sicily was magnificent. In The Godfather, the men inhale gigantic plates of spaghetti with various ragus (while the women watch anxiously from the kitchen). We inhaled a lot of ragus as well as plenty of involtini, a layer of food wrapped around a filling. The layer is often eggplant; the filling cheese-related.  Sicily also provided an introduction to arancini,the filled rice balls that have recently become a trendy appetizer in upscale American restaurants.

Panino con la milza, a roll stuffed with boiled beef spleen topped with caciocavallo–a sheep’s-milk cheese– which we enjoyed at Antica Focacceria San Francisco, is a must-eat in Palermo. (It sounds vile  but honestly, it was wonderful.) The restaurant itself dates from 1834 and is said to look pretty much as it did then (tiled floors, not-pristine long, wooden bar, darkly-encrusted pots.)

In the Godfather spirit, here’s a recipe for a very good ragu. If you absolutely can’t get ground veal and pork, you can substitute all ground beef. The result won’t be seriously authentic but it will still be delicious. FYI, if you end up with an overabundance of ragu, it freezes well and makes a great meal when you don’t feel like cooking. 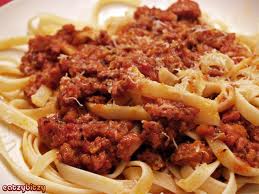 5 tablespoons extra virgin olive oil (a very pretentious phrase I am coming to loathe. When does one use old,, third-pressing olive oil?)

In a large, heavy-bottomed saucepan, heat the olive oil and butter over medium heat. Add the onions, celery, and garlic and “sweat” over medium heat until the vegetables are translucent and soft but not browned, about 10 to 15 minutes. Add the veal, pork, and pancetta and stir into the vegetables. (Add the meat over high heat, stirring to keep the meat from sticking together until browned and scrape up the brown bits)

Add tomato paste, milk, and wine and simmer over medium-low heat for 1 to 1 1/2 hours. Season with salt and pepper, to taste; remove from heat.

(I served this over tubular pasta but traditionalists would go for a spaghetti shape.)

Add the cooked pasta to the saucepan with the hot ragu and toss so pasta gets evenly coated.  Presumably while cooking you’ve been drinking some of the wine used in the recipe which will improve your meal and your attitude, should it need adjusting. Salute!